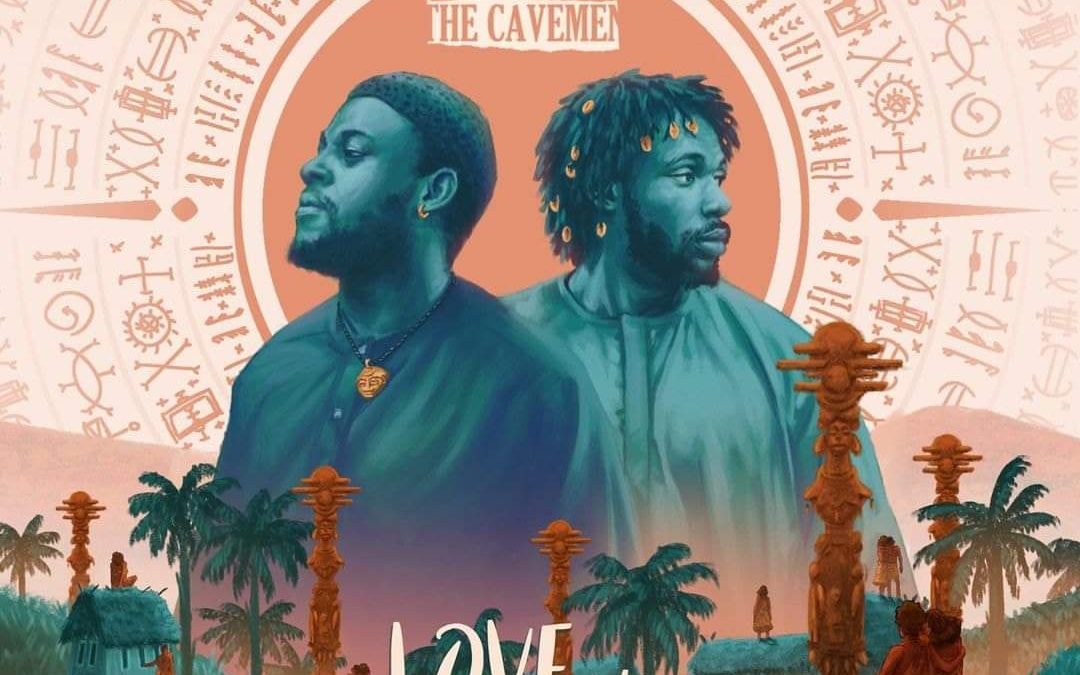 “Teach me how to love, show me how to be”. With a Drum pattern snapped from Ebenezer Obey’s much-loved Ballad “Baby Mi Jowo”. You are welcome to the opening number on “Love and Highlife”.

The chant reaches its crescendo before the hoarse vocal of one of the cavemen extinguishes it for the meantime. How do you show love in an unbalanced country like Nigeria?. it’s a function of a sermon enamored in melody, if performed on stage, the fans have a part to take.

The Cavemen breeze to a sweet start on their second album, like the first, the publicity around the album was mild, let the music do itself life all alternative artists tend to say.

The band made up of Kingsley Okorie and Benjamin James, have come a long way, they were a duo who once organized a free show and people failed to show up, there has been an elevation in their music stride, more importantly in the last 12 months.

Highlife music an offshoot of Palmwine music now has a second life, thank to The Cavemen, they seamlessly infuses contemporary ethos into their sound, although they deviate from the strongest feature of the genre which is praise-singing; you can’t hear them hailing Obi Cubana Or Opa Six, in place of that, the band croon about imaginary lover, as they did on “New Pammy”. The nonsubmissive Odoyewu became the muse for the drum and guitar-based track; it’s a nod to Anita off “Roots”.

Formed in 2018, the band released their first album “Roots” to a critical acclamation, their success got appreciated as they won “The Best Alternative Album” at the 2020 headies Awards.

Fela’s grandson, Made Kuti. belts his saxophone to the mid-tempo “Biri”, its message of life and letting other lives; it seeps into your system, you are bound to raise your hand in an angelic way to the rhythm and percussion on the song. Made Kuti’s saxophone is not overbearing; instead, it coordinates the sound.

Between 2014 and 2016, the Cavemen worked on Jazz with trumpeter Etuk Ubong. The trio served as the pilot for the psychedelic “Kpokom”. It’s bopping and it’s a stark departure from the flow of the previous songs.

Some tracks are all-out dancefloor burner: “The One”, “Selense”—one of the lead singles off the project, “Ihunanya”, “Nkari”.

When The Cavemen talk about love, it’s always rife with wisdom, the beat is mid-tempo, the instrumental hold the track while the lead vocal reel out the words, no rushing, he takes his time in articulating his words to the potential girl, and you think she wouldn’t accept such proposition?. Songs like “The One” and “Stranger” readily come to mind.

Brother’s Keeper, one of the fans favourite revolved around comradery and the place of love in society, the song gets enliven with the harmonious shekere, gong, and bassline.

Everyone tastes cupid arrow except the hard guy, skip that. They pretend they don’t, so, I would let it slide. After Anita, here comes Nneka on “Love and Trial”, the bittersweet shitsk gets drowned by the bright percussion. Love comes with its luggage, The Cavemen sermonized, who was the unnamed girl with that vocals?

The revered Cobham Asoquo comes alive on the ambient driven “Were Kwushin”, it taps into the place of destiny/fate in man’s expedition in life.

By the time the play spun to “Dance Like Cavy” and the last two tracks, it was glaring that The Cavemen came with the second blueprint. DLC is bolstered by brags, they have results to show for these mouthing. The lyrics are sparse, they leave the percussion to do the workings.

A decade after Nigerian sounds went viral, African parents are still not well disposed to their children taking music as a full-time job, when the Caveman’s mothers come upon “Alright With Mama”, it’s symbolic and historic. Songs like this are rare in the industry. AWM is layered on talks and prayers from the mother to his sons.

The last jump on a dance floor is usually dry, weary, and filled with sluggish guitar riffs, this was not the case on the last track “Good People” on this album, beyond espousing the importance of good people around us, it’s a tribute to the fans for all the love and support they showed them. The outro gives you this feeling of an Owanbe, the last guitar riff. Damn.

The cavemen build up on Roots, on this second output, they are more aware, the lyrics are deeper. It’s percussion-driven. After last year’s solo effort, it was awesome listening to the duet on this album. They come off naturally, with each part bringing their skill to bear on the tracks, at the end of the one hour, three minutes play, we have a sumptuous meal for all.