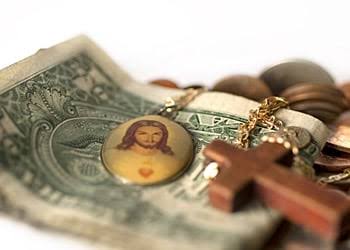 1. IT IS OFTEN MIXED WITH OCCULTISM
Before Christianity came to Nigeria, people visited witch doctors and sacrificed goats or cows to get prosperity. They poured libations on the ground so the gods would hear their prayers. Today similar practices continue, only the juju priest has been replaced by a pastor who drives a Mercedes-Benz. I am aware of a pastor who buried a live animal under the floor of his church to win God’s favor. Another pastor asked his congregants to bring bottles of sand to church so he could anoint them; he then told the people to sprinkle the sand in their houses to bring blessings. The people who follow these charlatans are reminded that their promised windfall won’t materialize unless they give large donations.

2. IT FUELS GREED
Any person who knows Christ will learn the joy of giving to others. But the prosperity gospel teaches people to focus on getting by all means. At its core is a selfish and materialistic faith with a thin Christian veneer. Church members are continually urged to sow financial seeds to reap bigger and bigger rewards. In Africa, entire conferences are dedicated to collecting offerings in order to achieve wealth. Preachers boast about how much they paid for suits, shoes, necklaces and watches. They tell their followers that spirituality is measured by whether they have a big house or a first-class ticket. When greed is preached from the pulpit, it spreads like a cancer in God’s house.

3. IT FEEDS PRIDE
This greedy atmosphere in prosperity churches has produced a warped style of leadership. My Kenyan friend Gideon Thuranira, editor of Christian Professional magazine, calls these men ‘churchpreneurs’. They plant churches not because they have a burden to reach lost souls but because they see dollar signs when they fill an auditorium with chairs. A selfish message produces bigheaded opportunists who need position, applause and plenty of perks to keep them happy. The most successful prosperity preacher is the most dangerous because he can convince a crowd that Jesus died to give you and me a Lexus.

4. IT WORKS AGAINST THE FORMATION OF CHRISTIAN CHARACTER
The prosperity message is a poor imitation of the gospel because it leaves no room for brokenness, suffering, humility or delay. It offers an illegal shortcut. Prosperity preachers promise instant results and overnight success; if you don’t get your breakthrough, it’s because you didn’t give enough money in the offering. Jesus calls us to deny ourselves and follow Him; prosperity preaching calls us to deny Jesus and follow our materialistic lusts. There is a leadership crisis in the African church because many pastors are so set on getting rich, they can’t go through the process of discipleship that requires self-denial.

5. IT ACTUALLY KEEPS PEOPLE IN POVERTY
The government of Malawi is currently under international scrutiny because of fraud carried out by top leaders. The saddest thing about the so-called “Cashgate” scandal is that professing Christians in the administration of President Joyce Banda have been implicated. One of these people stole millions of kwacha from the government and hid the cash in a teddy bear! Most people today in Malawi live on less than $1 a day, yet their leaders have been known to buy fleets of cars and huge plots of land with money that was not theirs. Sadly, the prosperity gospel preached in Malawi has encouraged pastors and leaders to follow the same corrupt pattern. As a result, God’s people have been financially exploited.

When Jesus described false prophets as wolves in sheep’s clothing, He warned us to examine their fruit. Matthew 7:17 says, “So every good tree bears good fruit, but the bad tree bears bad fruit” (NASB). What is the fruit of prosperity preaching?
Churches have been growing rapidly in many parts of Africa today, yet sub-Saharan Africa is the only region in the world where poverty has increased in the past 25 years. So according to statistics, the prosperity gospel is not actually bringing prosperity! It is a flawed message, but I believe God will use selfless, broken African leaders to correct it.